Christ at Our Heart

Armed Forces Week is a chance for people to show their support for the men and women who make up the Armed Forces community: from currently serving troops to Service families, veterans, reservists and cadets.

This year due to the coronavirus pandemic, celebrations to mark Armed Forces Week 22 June to 27 June and Armed Forces Day 27 June will be different to what was originally planned. 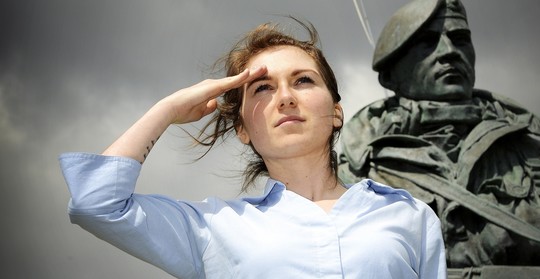 We've put together a page on our website with information and links to activities to help you celebrate from home.

You can join in with a national online ‘Salute our Forces’. To take part, take a photo or video saluting our forces and post it on social media using #SaluteOurForces #TeamBradford. The Armed Forces Day website has videos to help you to perfect your salute.

Wednesday 24 June is Reserves Day and is dedicated to all those men and women who make up the Reserve Forces. Reservists give up their spare time to serve, balancing their civilian life with a military career so they would be ready to serve as part of the military when needed.

If you are a Reservist, wherever your workplace is at the moment, one way you can celebrate, is to wear your uniform at home or to 'work' and post your photos on social media using #SaluteOurForces #TeamBradford

On Monday 22 June a flag raising ceremony will take place online and will be broadcast over our social media platforms at 3pm. The ceremony will open with a speech from the Lord Mayor of Bradford, Councillor Doreen Lee, and the short service will be led by Canon Paul Maybury, Canon Precentor at Bradford Cathedral.

The Armed Forces Day flag along with flags from the Army, Navy and RAF will fly in Centenary Square throughout the week.

The flag raising ceremony usually includes representatives of the armed forces including a presence from the local branches of the Royal British Legion, however this year due to the restrictions on the number of people allowed to gather and to protect those shielding from this deadly virus the event has been moved online.

As Monday 22 June is also Windrush Day the Windrush Flag, which was designed in Bradford and is now used by councils across the country, will also be flown on the 22 June.

To mark the end of Armed Forces Week and Armed Forces Day the annual Drumhead Service will also take place online. The service will be led by the Lord Mayor’s Chaplain, Reverend Dr Jonathan Pritchard, with contributions from the Lord-Lieutenant of West Yorkshire, Mr Ed Anderson; Lord Mayor of Bradford, and Canon Paul Maybury. Royal British Legion standard bearers Martin Fearnley from the Central Branch and Paul Lister from the Bradford Group, together with Paul’s five year old daughter Lola, will also feature in the online service.

This year’s Drumhead Service will be broadcast across our social media platforms at 11am on Saturday 27 June.

Armed Forces in Bradford helping with the coronavirus pandemic

Members of the Armed Forces have been aiding communities in the Bradford district with the response to the coronavirus pandemic by helping to deliver food parcels and assisting with logistical planning. © 2021 St William's Catholic Primary School.
Our school website, mobile app and podcasts are created using School Jotter, a Webanywhere product. [Administer Site]
We use cookies to provide you with the best experience on our website. Read our Privacy Policy to find out more.